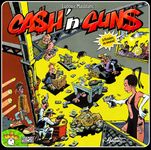 We talk about some games that we like with weird themes as well as talking about a few games with player elimination (a thing we normally do not like!) in this half and half episode. Once again, Jared is sick, and once again, a cat is screaming the entire time. We also talked about Japanese Kit-Kats for half of this episode, so make sure you check in at the 41 minute mark for that.
Read More