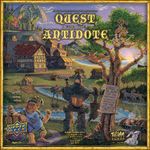 View Quest for the Antidote on BoardGameGeek.com

Quest for the Antidote

We talked to Quest for the Antidote's designer Tom Deschenes about his game. Do you have what it takes to find the cure?
Read More

We somehow survived Origins 2017, and we've brought back our opinions.  I think this is the most tired I've ever been near audio recording equipment.
Read More