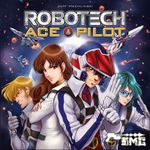 This episode we're talking about the cool stuff we bought at Gencon, or wanted to buy but couldn't because it was sold out already. And, as always, a 15 minute discussion on cereal.
Read More