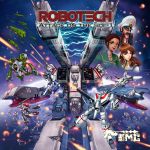 View Robotech: Attack on the SDF-1 on BoardGameGeek.com

Robotech: Attack on the SDF-1

We looked at the super lengthy list of games dropping as Essen Spiel and revisited some old episode topics. We might do more episodes like this where we drop the themed episodes. Is that cool with you guys? We'll probably do it anyway but I'd at least like to hear some feedback.
Read More