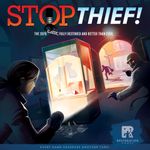 To kick off our series of public servant themed episodes, we're looking at police games, or at least sorta! I think many people played cops and robbers as kids, so it's not surprising to me to see that theme in board games.  There are a lot of these and we only had time to pick a few, but this is a topic we will for sure revisit in the future.
Read More