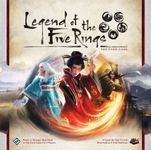 View Legend of the Five Rings: The Card Game on BoardGameGeek.com

Legend of the Five Rings: The Card Game